Our Musings on Frida Kahlo and Her Self-Portraits

"They thought I was a surrealist, but I wasn't. I never painted dreams. I pain my own reality" To me this is heart wrenching. Her reality was one dominated by physical and emotional trauma . .

I am far from being the only one with Frida fever at the moment. The V&A exhibition a year ago “Frida Kahlo; Making Her Self Up” followed by a trip to Mexico exploring textile and seeing our wonderful artisans there, left me buzzing over both our products and her story.

“They thought I was a surrealist, but I wasn’t. I never painted dreams. I paint my own reality.”

To me this is heart wrenching. Her reality was one dominated by physical and emotional trauma, resulting from her appalling injuries; her love of Mexico and adoration of her husband, Diego Rivera, all of which she vividly portrayed in her self portraits. The emotions and pain she shared through her art, stayed within me long after I left the exhibition.

With so many years spent lying in traction, recovering from operations, flat on her back alone, she had had to give up her medical studies. She was left with little to divert her attention, except fro the study of herself. With a mirror above her bed and a paint brush in her hand, she painted her internal and external world. Out of 145-odd paintings, 55 of them are self-portraits. Each one portraying much more depth and insight than our modern photographic selfies. She paints her physical and emotional pain so starkly and her physical attributes in such a harshly self critical light.

From the photographs I have seen of her life, especially later life when she really embraced her Mexican roots, she was a striking, vivacious and colourful person. Her smile would dominate a picture. Yet in her self-portraits, not only does she rarely smile, she heavily exaggerates her black monobrow and dark moustache. i wondered, was it a self critical view of herself as ugly both on the inside and outside, or an intentional blurring of traditional physical gender expectations because she did not want to be stereotyped, or a determined fighting message to say – this is who I am.

Far more agonisingly, however, is the raw emotional and physical pain she portrays, as a result of illness and accidents and betrayal. From a young age, Kahlo suffered from polio, leaving her right leg withered in comparison to her left. At 18, she was riding a bus that collided with a tram leaving her with a broken spinal column, collarbone, ribs and pelvis, 11 fractures in her right leg and a crushed and dislocated right foot and shoulder. She had 33 surgeries throughout her lift, but never fully recovered from them.

“There has been two great accident in my life. One was the [tram], and the other was Diego. Diego was by far the worst.”

Frida’s love for Diego Rivera was all consuming. However, they had a tumultuous relationship with countless affairs and a divorce (followed shortly by re-marrying). Her loss of him resulted in arguably her most famous self-portrait “The Two Fridas”, which expressed her desperation and loneliness with her separation from Diego.

Kahlo was half German and half Mexican. In her earlier life, she would wear predominantly modern European attire – here on the left is Kahlo wearing the traditional European style dress she wore prior to her marriage to Rivera. However, the influence of Rivera’s strong nationalism encourages Kahlo to become expressive with traditional Mexican costume, which she wears in the portrait on the right. The stormy sky in the background, and the artist’s cut, bleeding open heart, all too vividly show her heartbreak and distress at the separation from Rivera. On the left, is her European side where life is dripping from her, on the right in Tehuacan dress, she clutches a miniature Rivera, where her heart is complete.

I felt such a pain of emotion and admiration for the brutal honestly of Kahlo’s self portraits. She was a true inspiration, not only in her time but for today too. She expressed herself through her paintings, her colourful clothing and statement jewellery, her love for Diego Rivera and her politics.Diminutive in statue, physically and emotionally broken, she remained determinedly and overtly her own person, with her own inimitable style. For this, I have the most immense admiration.

Please click here to see our beautiful range of tableware inspired by the traditional designs and skills of our artisans in Central Mexico. Items sold out on the website can be specially ordered within an approximate 8 week time frame. Please bear in mind that each items is hand-made, involving 4 different stages, 4 very different skill set from artisan based in different villages in Mexico, according to the traditional skills of each individual area. 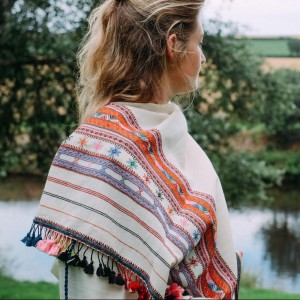 Cheskie is a designer, stylist and creative entrepreneur with a deep affinity for textiles. Her work takes her around the world, where she has the privilege of meeting many inspiring artisans with skills to show and stories to share.
PrevPreviousMood-Board Inspiration – Art Deco Interiors
NextMood-Board Inspiration – Pantone Colour of the Year 2020Next

Mood-Board Inspiration – Add Some Velvet Luxury to Your Home

Our fabulous guest mood-boarder and blogger, Emma Scott, pulls images together of velvet to bring a luxurious accent to your aesthetic.

Rather than focus on how much damage we are causing the earth, let’s instead focus on the fun part – where we can indulge our love of shopping whilst making a positive difference!

We caught up with the wonderful Alice from World Secrets. Her company sells the most fantastic, colourful shoes and accessories that make you beam with every step.

Get special offers, news and information by signing up to our newsletter.

Made with ♥ by Olive & Lake

Sign up to our newsletter to be the first to receive information on new products, discounts and doses of design inspiration.